eBizplan.net is about finding answers for your business challenges and opportunities. Also to join our community and share… 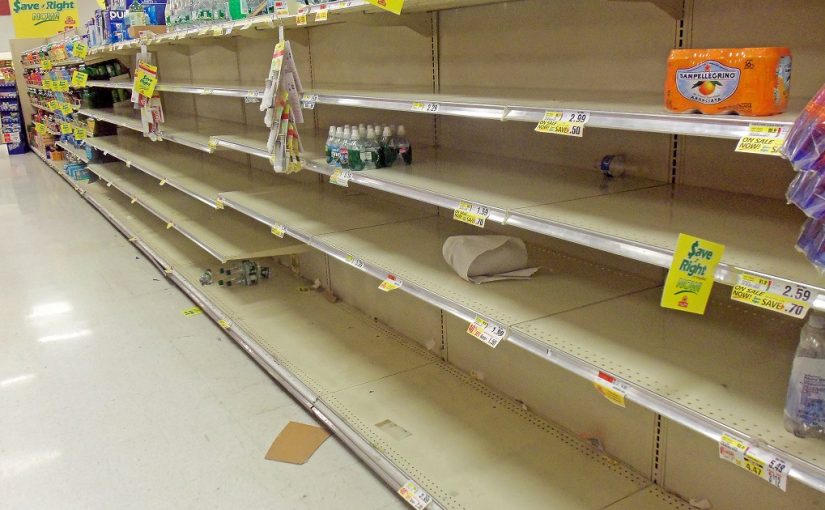 Tuesday, October 10, 2017 in Durban. It was a lovely spring morning…; then suddenly, all hell broke loose. More than 140 mm (5 and a half inches) rain fell in a couple of hours. With that, strong winds uprooted trees and demolished roofs and sheds. For me, retail and climate change met when the massive container ship MSC Ines disengage from her mooring to block the entrance of the Durban harbor channel to shipping… What if the entrance of the harbor remains blocked for a long period of time?  That may simply means that most retailers in South Africa may soon run out of merchandise. But that’s not all. Most of the warehouses were flooded and damaged in the storm, also not helping. Can you imagine grocery stores with empty shelves and frustrated customers?

This is an extraordinary scenario where retail and climate change have met. But where else do they meet…

Retail and climate change are meeting in the stores

Remember the good old days when we still had seasons? I mean like summer, winter, fall and spring? Maybe the days are gone when winter clothing fashion shows caused a stir late summer and visa verse with summer fashions. I suppose that’s way Arthur Zaczkiewicz asked in WDD: “Is Climate Change Killing the Seasonality of Fashion Apparel Retailing?” According to Arthur, one easily noticeable effect of the impact of climate change on fashion apparel and retail are sales of outerwear. Last year’s lack of “sweater weather” caused by record warmth during October, November and December, resulted in excess inventory of sweaters, jackets and coats.

In fact, results from a doctoral study done by Islam Molla (2016) 1 in the US revealed that change in temperature affects the impact of wholesale sales on retail sales during the months of June, July, and August. Therefore retailers need to implement some strategic managerial decisions to reduce their inventory as well as their cost, suggested Molla.

But climate change is not only affecting the fashion retail.

An even bigger threat of climate change concerns food security. Most of us has probably experienced shortages of certain food groceries because of a severe drought or flooding. In South Africa, for example, the recent drought had caused the price of meat to rise with about 17% since January 2016 (Colleen Goko, Business Live).

Some foodstuffs can become scarcer or disappear altogether. This may be because climate change makes it more difficult to grow crops, raise animals, and catch fish in the same ways and same places as we have done in the past (EPA). Should we get used to grocery stores displaying half empty shelves?

What about the effect that climate change has on infrastructure?

Retailers are heavily depended on workable infrastructure to get customers into the stores and to fulfill orders. Storms and temperature extremes can damage or destroy infrastructure. Indeed, that’s what happened in Durban recently.

Apart from the harbor entrance that was blocked, roofs were blown off warehouses and factories. As result thereof, merchandise were damaged and production at several factories ceased. Roads were destroyed and power lines were swept away. Moreover, the signal towers of mobile phone networks were damaged.

Indeed, retail and climate change met in a devastating dance that day…

So, climate change can’t just carry on disrupting our lives forever one should think? No, we all have a government to make laws to contain the beast. But how will the regulations and laws affect us?

To begin with, the laws and regulations to reduce the effect of climate change were introduced halfheartedly and not globally. Even the USA recently backtracked on the Paris accord. The Paris accord is a voluntary treaty that allows signatories to set their own pace of decarburization, so long as it is consistent with limiting global warming to 2 ᵒC.

If the leading nations don’t care about climate change, then not only retail but the existence of humankind is in danger…

It seems that much had been said about climate change, but little has been done. I suppose it had do with egos and politics. Should we as retailers not start introducing steps to minimize the effects of our businesses on the climate? Maybe then retail and climate change can dance to a different tune…

Read also: Include a market analysis in your business plan

A well researched and written Business Plan helps to get your business started the right way.

44 thoughts on “Retail and Climate Change – A Devastating Reality”

This site uses Akismet to reduce spam. Learn how your comment data is processed.